Now for a very special interview with the gifted, mysterious genius PUMPKINROT! This guy has inspired me so much. For the few of you who aren’t already aware, Pumpkinrot is a Halloween artist and blogger. His top-notch yard-haunting skills transcend the craft; he basically designs professional-caliber movie sets in his lawn every October 31st (photos of which are displayed on his site). His amazing handmade props have gotten him national attention, as with the 2013 horror film Mr. Jones, for which he was handpicked to design the scarecrows. Just quietly working from his home in Pennsylvania, he has drawn ardent followers and admirers based on his astounding talent alone. He’s the real deal.

His year-round Halloween blog is the sole reason I am able to survive the months between November and September. He is an unending source of Halloween ideas, images, music, recommendations, news, quotes, stories, film previews, TV clips, and more, and his site is an essential bookmark for any Halloween lover.

Pumpkinrot is an extremely private person, so I’m truly honored that he agreed to answer some questions for this blog. I’ve been looking forward to this post all year! I hope you all enjoy it.

Q: Which one of your creations are you most proud of, and why?

A: “I’m a harsh critic of my own work, and I’ll always see where I should have made different choices in each of my props.  Most of the time I try not to focus on one particular piece since I’m always thinking of how it fit into the atmosphere of the Yard Haunt as a whole.  So I’ll say that in terms of a prop where I have nitpicked the least and where I felt it really tied the entire Haunt together, I’d have to go with either of the Blind Sentinels from my Scarecrow Catacomb display.  I’ve never worked harder or longer on a prop.  And usually I break my props down to recycle their parts into new creatures, but I can’t bring myself to do this with those guys.  To date, I’ve only kept the Pumpkinrot scarecrow, Johnny Appleseed, two Swamp Foetus creatures, a Deathly, and the three Skull Witches.  Everything else has been used for spare parts.”

Q: If you had unlimited resources (i.e., all the money, time, and supplies you needed), what would you build?

A: “I think I’d love to have someplace like a big old barn where I could build different displays in different rooms.  As a Haunter, so much of my life has depended upon having good weather, so to have that variable removed would be pretty neat.  To make a narrow corridor lined with Pumpkin Sentinels or Skeletal Knights would be incredible to design and execute.  To re-create a small forest with real tree limbs surrounding the Skull Witches and their tree stump cauldron would be a ton of fun.

Experimenting with lighting and atmosphere in an enclosed permanent area is very appealing to me these days.  Then I could sit outside in an old chair and grumble ‘That’ll be one dollar to see the Haunted Barn…'”

Q: What do you value about anonymity?

A: “I’ve always been a low-key private person.  And for whatever reason,  I’ve always preferred featuring my work as-is with no connection to who made them or how they were made.  Like when I go back and look at old photos and see something like the Corn Witches around their cauldron surrounded by brutalized corpses, I fear that there’s some magic that would be lost if folks could click on a link and see the ladies being constructed.  As odd as it might sound, I feel like their life comes from the fact that they just mysteriously appear in my site’s photo galleries one day after each Halloween.”

Q: Explain why your work has a natural, organic feel to it.

A: “I’m going to blame that on my obsession with scarecrows.  In the first few years of Yard Haunting, I didn’t make props with roots and branches and vines, but I always saw Halloween as having an earthy side.  A jack o’lantern on a porch becomes something entirely different if you place it on a clump of leaves and stick a gnarly twig next to him.

Back when I was building Johnny Appleseed I was neurotic about finding small squiggly roots for his body and hands.  Spent way too much time trying to hunt them down.  I went for a walk through a state park and couldn’t find anything on the ground in all the clumps of clipped branches or fallen limbs.  When I got back to the parking lot defeated and planning to just cut some branches from my backyard, there was a pile of roots sitting next to my car.  I think a small tree had been uprooted and a park employee placed them there to be hauled away later that day.  I picked every one of them up and stuffed them into my trunk and drove away.  After working with them and seeing how well they blended with the mache, I was hooked.  The Universe was pointing me in a certain direction…” 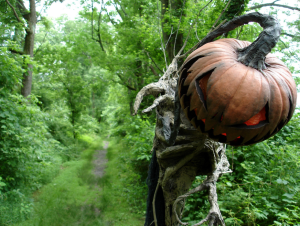 Q: Would you ever consider designing a haunted house?

A: “I have a feeling I wouldn’t want the pressure of designing something that would have mass appeal.  I think my Haunted Barn pie-in-the-sky dream would be a money pit since people would most likely expect jump scares and actors and some chainsaws.  And I love all those things when I visit a haunted attraction, but I just wouldn’t want those to be a part of something I was designing, so I have a feeling I’d butt heads with the person running the show (and paying the bills).”

Q: Do you ever still dress in costume for Halloween?  If you had to wear a costume this year, what would it be?

A: “I gave up dressing as Michael Myers a number of years ago and don’t currently dress in a costume to hand out candy on 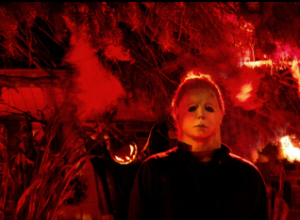 the big night.  I had a love/hate relationship with Mr. Myers.  I knew that kids and their parents loved seeing him sitting in the darkness, and I’d play the part with the head tilt, and slow movements, and never saying a word, but being a pretty quiet guy, it always felt very out-of-character for me.  I guess that’s ironic now that I think about it.

Now that I don’t decorate at my parents’ house like I did in the Myers years, I like the idea of the display being unmanned.  It gives the trick-or-treaters and parents some time to appreciate the atmosphere if a figure isn’t sitting out there with them waiting to give them candy.  Then they can ring the doorbell when they’ve taken it all in.

If I HAD to wear a costume this year, I’m not really sure what I’d be.  It would have to be something that went along with this year’s theme, though I wouldn’t want it to be anything too blatant or over the top.  Probably Michael Myers.

That last part’s a joke.”

Q: What is the most terrifying story (real or not) that you’ve ever heard or read?

A: “I usually read stuff that isn’t horror, like Ray Bradbury, or short story anthologies.  I think I might have a short attention span.  Years ago I picked up the absolutely amazing October Dreams: A Celebration of Halloween by Cemetery Dance Publishing.  Tim Lebbon’s story “Pay the Ghost” is the only story I’ve ever read that I found to be truly chilling, to the point of it being constantly on my mind.  Very disturbing and unsettling.  I can’t say that any other story has done that for me.”

Q: Why do you love Halloween?  What are your favorite things about the holiday?

A: “There really never is a solid answer for this one when I try to figure it all out.  I have truly worshiped the holiday from the beginning.  And I had two parents who were pretty impartial towards Halloween, and all holidays in general.

Every aspect of the High Holiday is exciting and thrilling.  Even the word HALLOWEEN is a beautiful thing.  I look back on my life and can see how I was more fanatical about the holiday with each passing year.  And how it kept changing as my life would change.  Being too old to trick-or-treat probably should have taken its toll, but it turned me into a Yard Haunter.  The holiday being only one day a year probably forced me to build my site and run the daily blog so I could have Halloween every day.

And Halloween was how my wife and I found each other.  So I’ll forever be in its debt.

Some of my favorite things:  Real jack o’lanterns on dark porches, old ceramic skulls in windows, fake spider webs, paper decorations like the kind the teachers would put up when I was in grade school, cold cloudy days in October, dummies in old lawn chairs, rubber-masked ghosts, the smell of smoke, the sound of wind through corn stalks, and pumpkins.  An absolutely unnatural love of pumpkins.”

Thank you, Rot, for sharing your thoughts with us. You are truly the King of Halloween!!

All work by Pumpkinrot, and all photographs from his site.

27 thoughts on “Interview with Pumpkinrot!”