First of all, happy October!! In honor of our favorite month, if you will indulge me, I would like to share my recommendations for perfumes that to me evoke fall and Halloween.

Perfume is another one of my interests, and really, fragrance and Halloween have something in common: They both offer transformative means of escape from reality. In a sense, perfume is another type of costume — one that can be worn any day, and anywhere.

Below, in no particular order, are my descriptions of scents that I own and love to wear this time of year. (And for all of you synesthetes out there, I’m even including a color-association label with each one.)

Elixir des Mervielles, by Hermes: This scent would by some be considered a summer scent because it has an unmistakeable saltwater accord. However, I include it here because it contains ambergris, one of the most unique natural substances on the planet. Ambergris is derived from, as one of my favorite perfume bloggers put it bluntly, “whale hairballs.” It is literally a mass of undigested squid regurgitated from the stomach of a whale, which over time turns gray as it hardens in the waves. It is the musk of the sea. Throughout history, witches have used this magical stuff in passion spells and sex potions.

In addition to the ambergris, which is the source of the perfume’s oceanic smell, Elixir des Mervielles also contains a dark chocolate undertone, and a sparkling citrusy effervescence for a top note.

Nirvana Rose, by Elizabeth and James: This rich scent is sexy and velvety, but also as pitch-dark and cold as a coffin. Something about the way the rose accord blends with the oud creates a smell that’s very similar to the scent of a fresh leather glove, or an unridden leather saddle. It’s one of those haunting aromas you can’t stop sniffing.

Youth Dew, by Estee Lauder: I know, I know — worst perfume name EVER. Total misnomer, actually; there’s nothing about this fragrance that smells young or dewey. Instead, it has the rich scent of cinnamon, clove, and dark resin. There’s a certain opulence to it — something almost oriental, but more austere. It smells like a pile of wood cut for a bonfire in a fall cabin, left there to gather a pleasant mustiness over the decades, and the warmth of skin brings out a maple-syrup sweetness. It epitomizes autumn for me.

Patchouli: This note has gotten a bad rap after becoming associated with hippies and headshops, but it’s actually the grounding source for many popular mainstream scents, like Christian Dior’s Miss Dior and Thierry Mugler’s Angel. And as I’m sure most of you know, patchouli is the basis for the much-loved Yankee Candle “Witches’ Brew.” It makes my list of Halloween recommendations because, when pure, it smells like wet earth — like, perhaps, dirt being dug for a fresh grave in a forest cemetery.

18 La Lune, by Dolce & Gabbana: It is beyond cool that D&G released this line of perfumes, which is inspired by Tarot cards. This one (La Lune, meaning “The Moon,” number 18 in the major arcana) is my favorite of the series, which also includes 1 Le Bateleur (“The Magician”), 3 L’Imperatrice (“The Empress”), 6 L’Amoureaux (“The Lovers”), and 10 La Roue de la Fortune (“The Wheel of Fortune”). 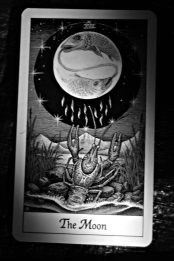 The moon Tarot card symbolizes our subconscious, dreams, and intuition. It can be a warning that we are being irrational or following an illusion, or it can be a reassurance that things are not as they appear. The mysteries embodied by this card are depicted effectively in 18 La Lune, which interprets it as a light, ghostly scent. Delicate as moonlight itself, the ethereal fragrance is clean and slightly powdery — like Ivory soap cut with pale irises — but has a touch of white pepper.

Chanel No. 22: Once I was stuck in midtown Manhattan looking for shelter from a sudden rainstorm. I ducked into a very small, but very beautiful church, which has staggeringly high Gothic arched ceilings covered in inky blue paint dotted with seven-pointed stars (see photo below). While there, I was spellbound by the smell of the place: the old, fine stone walls filled with a heady, remarkable incense. I asked an usher and found out they actually make the incense there, in the church’s basement. And incidentally, this is also the scent captured by Chanel No. 22. Picture the classic smell of incense, but without all of the smoke: freshly cracked black pepper and sweet pine. Add to this an uplifting shimmer, almost like the fizz of champagne. If ever a scent could be described as holy, this is it.

4 thoughts on “The Invisible Veil”