The annual “Halloween Extravaganza,” held at the Cathedral of Saint John the Divine in New York, never, ever disappoints.

Though my photos below do not do it justice, here’s a little taste of what it’s like to attend the event.

You walk into an intimidatingly enormous Gothic structure. It has been lit and decorated to resemble a haunted sanctuary of evil. (Presumably the opposite of its atmosphere during usual daytime hours.) 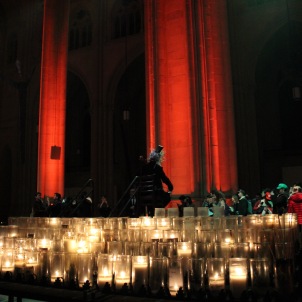 Then you are greeted by a skeleton playing live cello.

Even many of the attendees come in costume.

You sit on a chair in the church’s enormous nave, beneath a soaring dome that is tall enough to fit the Statue of Liberty (no exaggeration), facing a projection screen. 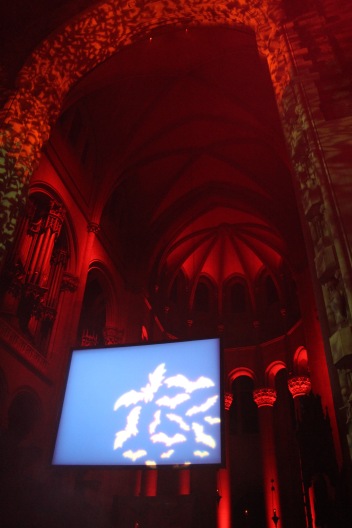 Soon, the church fills with organ music, loud and low enough to rattle your ribcage.

Then the silent film begins. This weekend’s selection was The Cabinet of Dr. Caligari (1920). It is accompanied by the live organist.

After the screening, the church slowly fills with a creeping fog. Soon, people in demon costumes that look like twisted Jim Henson creations start parading slowly down the aisles of the seating area.

They creep and lope erratically, interacting silently with the audience as they pass. The church gradually comes alive with sinister ghouls.

At the end of the parade, the organ plays a triumphant version of “When the Saints Go Marching In,” and you exit underneath a giant spider boogying on top of the church’s rose window.

You leave feeling as if you have experienced firsthand the lifting of the veil between the living and the restless dead. This is by far one of the best and most unique Halloween traditions.